The Beltline is the densest and most populous neighborhood in Calgary. It comprises the former neighborhoods of Connaught on the west (West Connaught and Connaught Centre) and Victoria Park on the east (Victoria Crossing Centre and East Victoria Crossing). The Beltline, in spite of the close proximity to Downtown, has to confront the physical and optical barrier of CPR mainline tracks. This fact, in conjunction with the large areas of parking lots, makes this area of Beltline, commonly known as Midtown district, unfriendly to the pedestrian environment. The high occupation of remnant public spaces by cars is often encountered, especially at Connaught Centre where multi story residential towers are located. According to the Beltline Area Redevelopment Plan, the area is intended to operate as a mixed-use region and is to include a mix of commercial services and high density condominium and apartment towers. This will increase the amount of vehicles and as a consequence, spaces between buildings will be used less and less by pedestrians and will end up unattractive for use or even abandoned.

The main goal of the intervention is to reactivate the underused urban spaces, the so-called “voids”, in the area of Connaught Centre. Remnant areas or corridors between buildings which are only being occupied by cars are usually excluded to the public due to this specific use. Unpleasant, unsafe (during the night), hot (during the summer) spaces are not attractive for socialising. From the other side, spaces between buildings are small and vary in area and form. Additionally, they are well protected from winds and traffic noise, so their transformation to attractive public spaces does not need a great amount of new constructions or even a big budget. Designing less for the vehicle and more for a walkable and mixed-use community will reinforce public interaction, participation in group activities and will promote public life in underused spaces between buildings. So, the proposal tries to establish a social interaction between people and the city. Space invoiders create diverse environments accessible only for pedestrians and establish different atmospheres during all seasons.

In order to achieve a slow transition from unused to utilised spaces, the proposal allows to upgrade the public realm with feasible and simple small-scale interventions, which can improve the ecological, social and economic conditions of these spaces. The projects are divided in two categories: the ephemeral, which are short-lived projects without extension e.g. pop- up uses, or provisional projects that start out as short-lived, but in the future can be developed into a more long-lasting or permanent. The three catalytic planning tools of the interventions are stop and move, recreation and interaction. With these points in mind the “invoiders” function as the spaces, where everyday life invades and takes place. These kind of interventions are possible to spread through other in-between voids and form a network of public spaces in the city.

Space invoiders are used by pedestrians and bicycles only. Blank facades are used as well as part of the interventions. Purple colour indicates the projects but also it creates a colourful atmosphere to the environment. Trees and vegetation is an important aspect of the proposal in order to improve the micro- climate of these spaces. All in all, each invoider is a flexible space in terms of circulation and function. The proposed uses are: 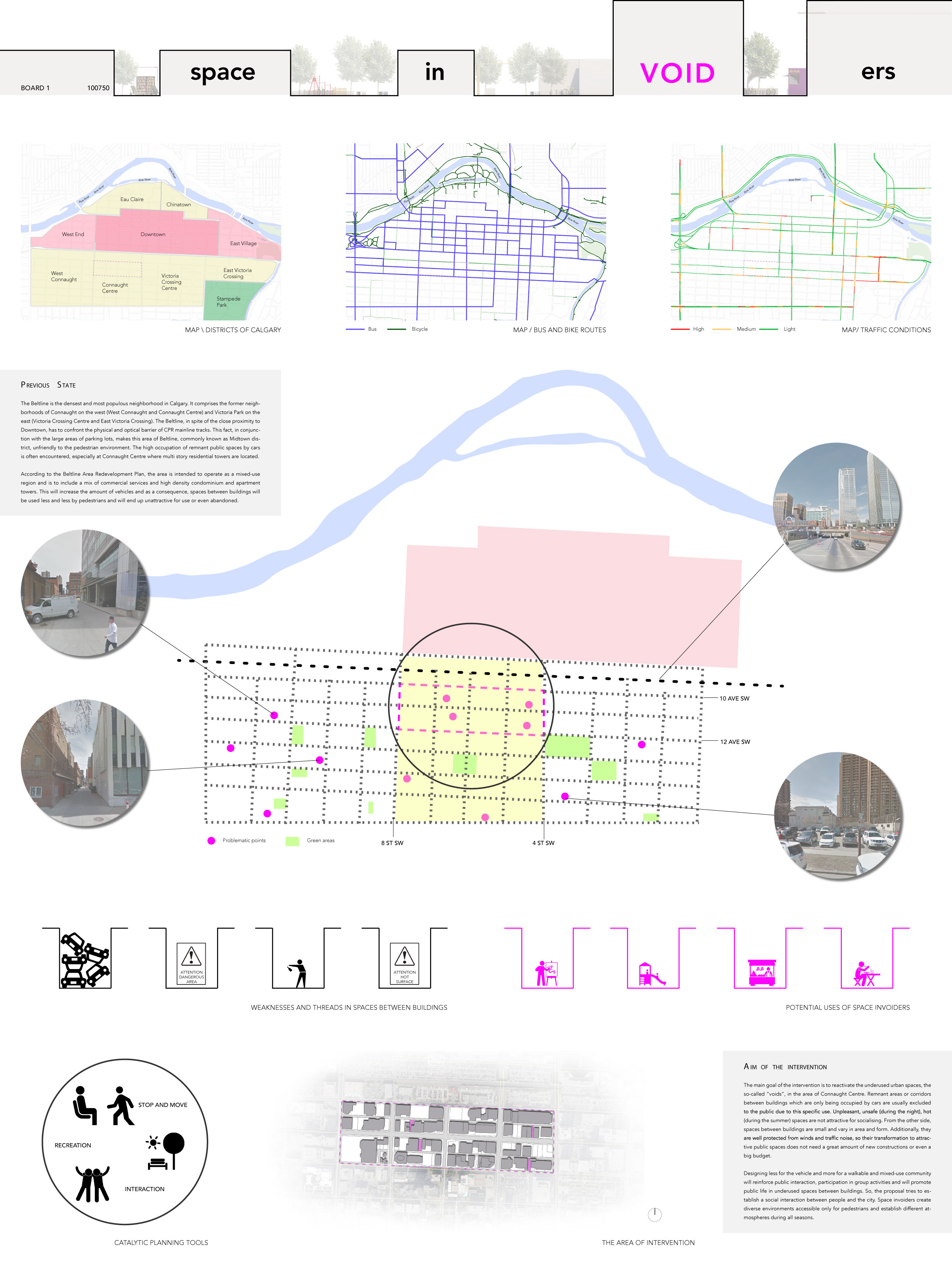 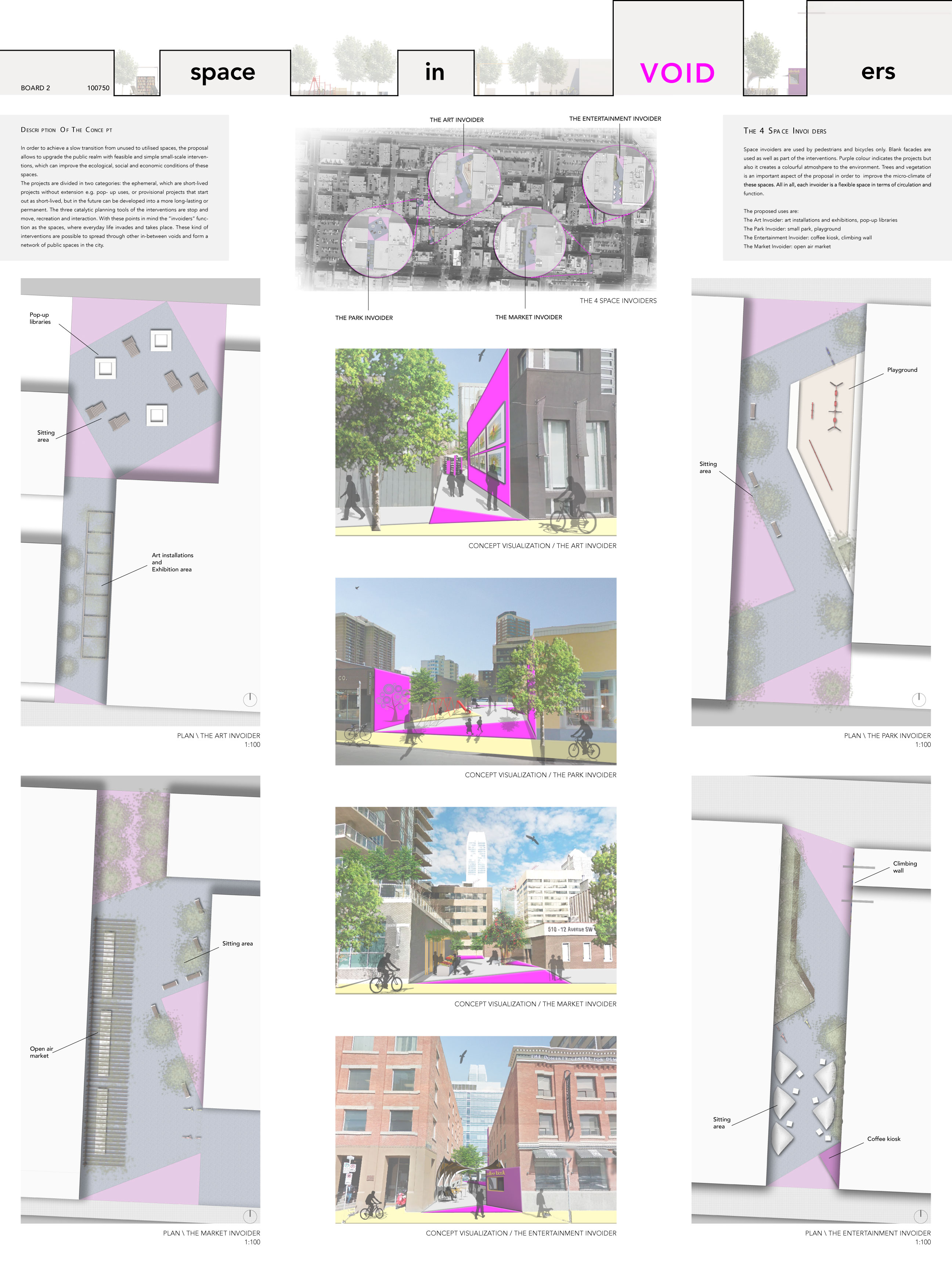